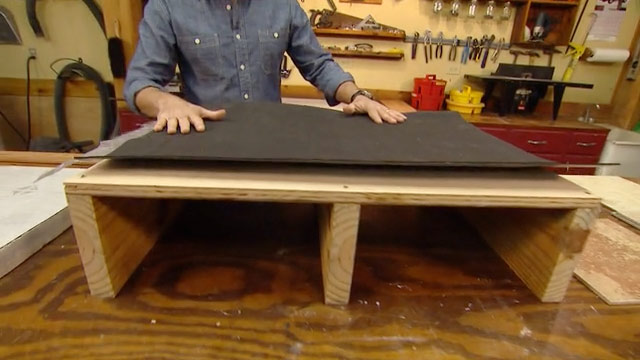 It’s common to think of the stiffness of a floor as being simply a function of the joists, but the joists work in concert with the subfloor. The subfloor helps to distribute point loads between multiple joists, and it stabilizes the joists so they don’t roll under load. And whereas joists provide strength and stiffness along their length, the subfloor provides these qualities between the joists.
There are three main types of acceptable wood subflooring material: plywood, OSB, and solid boards. Until plywood became common in the 1940s and ’50s, subfloors were made from solid wood boards. In the 1980s, OSB subflooring began to gain ground. Today, subflooring is made almost exclusively from plywood and OSB panels. These panels are more cost-effective to install and offer structural advantages, particularly in seismic and high-wind zones. However, old-fashioned solid board subflooring retains wood-flooring fasteners better.

Solid board sub-flooring should be kiln-dried and made of so-called “Group 1” softwoods, such as northern Douglas fir, western larch, and southern pine. The boards should be at least 3/4 in. thick and no wider than 6 in. (nominal). Wider boards move more during moisture changes. The boards should be installed at an angle to the joists (45° is most common). This is because it’s best to install the finish floor perpendicular to the joists so you aren’t relying solely on the subfloor to support the flooring between the joists. If both the board subfloor and the flooring boards were installed perpendicular to the joists, excessive movement might occur with moisture changes. Also, it would be inevitable that the edges of some flooring boards would end up directly above the joints in the subflooring, and they’d essentially be unsupported.
Even when board subflooring is in good shape, parquet flooring, thin strip flooring (less than l/i in. thick), and some engineered wood flooring can’t be installed directly over it. A layer of plywood underlayment at least 3/s in. thick is required first. It’s typical for there to be some irregularity between individual subfloor boards, which in most cases can be easily bridged by 3/4-in.-thick wood flooring. However, the thinner strip and engineered flooring tend to telegraph these irregularities. And because parquet flooring consists of small pieces of wood assembled together, any movement of the subfloor boards that would be accommodated by most strip or plank floors will cause gaps and squeaks in parquet. Since the plywood underlayment is more stable than board subfloors, it solves this problem.

Structural wood panels such as plywood and oriented strand board (OSB) are the most common sub-floor materials today. Plywood is composed of thin sheets of veneer, or plies, laid up in cross-laminated layers to form a panel. Cross-lamination minimizes dimensional changes, making an extremely stable product. Plywood always has an odd number of layers, with the face layers’ grain usually oriented parallel to the long dimension of the panel. Plywood is stronger along its length than its width so should always be installed per­pendicular to the joists.

Rather than sheets of veneer, the base material of OSB is wood that’s been chipped into strands. These strands are compressed and glued together in layers (usually three to five) oriented at right angles to one another. The orientation of layers achieves the same advantages of the cross-laminated veneers in plywood. Like plywood, OSB is stronger along its length than its width. Plywood and OSB subfloor panels should be performance rated and marked to indicate that they meet national standards.

The minimum thickness of wood subfloor panels is 5/8 in. for plywood and 3/4 in. for OSB, both to ensure the floor is stiff enough between joists and to give the flooring fasteners enough material to obtain full holding power. The thicknesses given for wood panels are nominal. Actually, the panels usually measure V32 in. thinner than nominal: A 5/8-in. panel will measure 19/32 in. and a 3/4-in. panel will measure 23/32 in.

Visit Our Showroom Today
Kapriz Hardwood Floors is a real store: This means manufacturer backed warranties, expert advice and proven end results for you, our client. We are not a risky internet store front with a polished website and shopping cart that is shipping from a random and unknown warehouse. We are here to work for you. We value our customers and will help you find the right floor for your home and budget. Call now to learn about our daily specials and how Kapriz Hardwood Floors can satisfy your unique wood flooring requirements right away!